Improving connectivity in our part of the world was one of my first pledges when I began campaigning to become the MP for Mid Norfolk back in 2007 – and we have seen hugely positive progress, with more to come.

However, the dualling of the North Tuddenham-Easton A47 stretch (which is part of the £300 million commitment for the first phase of A47 dualling/improvement works, as well as the Norwich Western Link, must be delivered correctly – so as to avoid shifting the awful rat-running problems affecting communities to the north-west of Norwich to those to the west and south-west of the city.

We must also do all we can to ensure that delivering these key pieces of infrastructure does not come at the cost of severing vital local access routes – upon which communities so often rely (whether that be to get to the nearby school or the community shop/pharmacy in the next village).

That’s why I was delighted to convene a meeting with Jerome Mayhew MP and Norfolk County Council officials today – with the local county councillors and Parish Chairs of some of the most concerned areas – to look at some of the outstanding rat-running and local access issues that still need to be addressed in the final proposals for these two huge pieces of vital Norfolk infrastructure.

This work builds on that which I have done already with the South of the A47 Taskforce that I support, and I remain firmly committed to working with other key parties to hold the authorities to account on these issues.

To learn more, please do look back over past webstories, as well as my Taskforce campaign page here 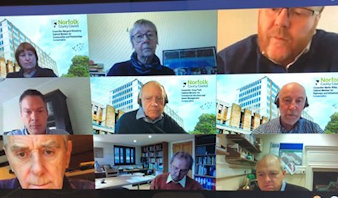